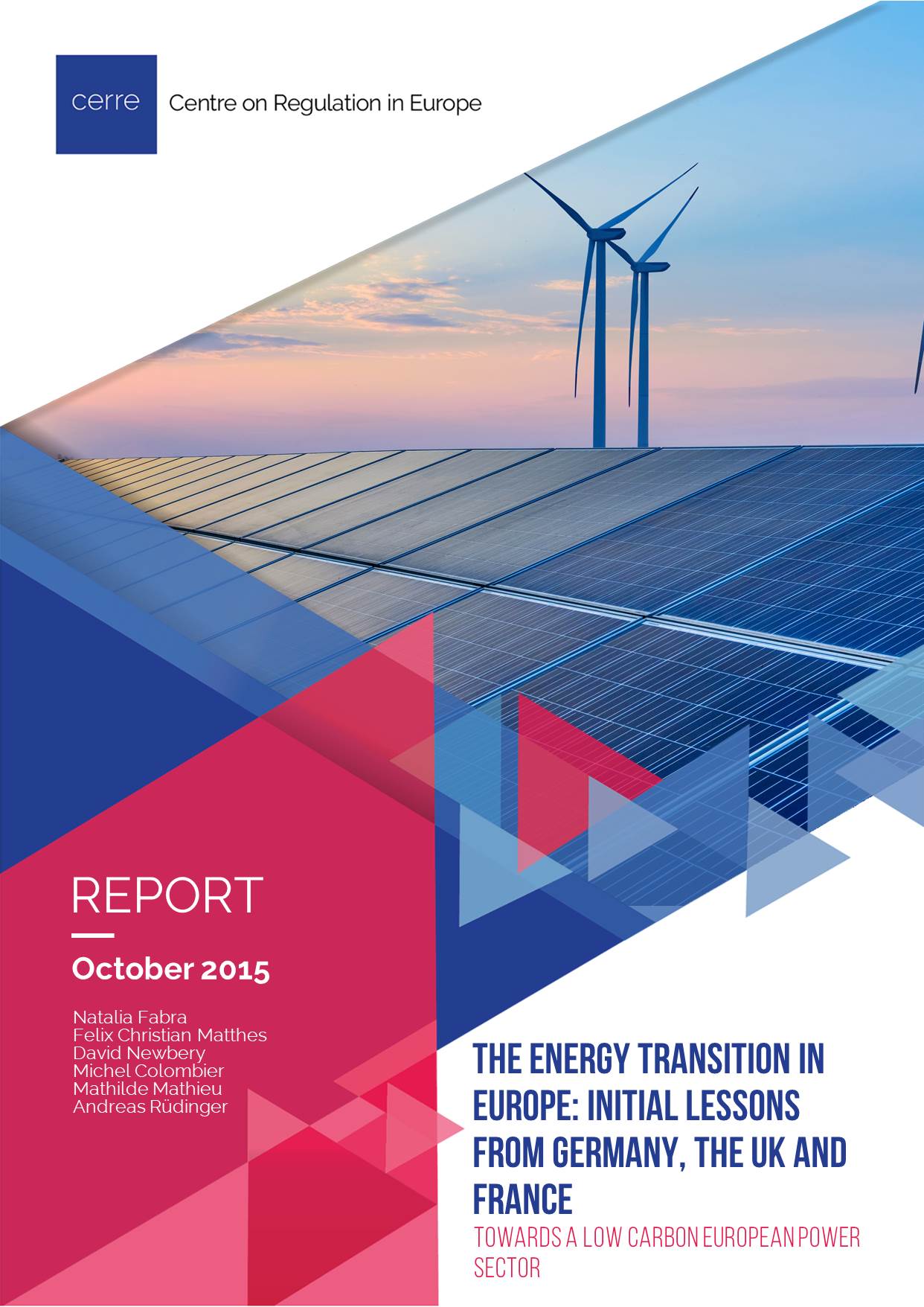 The Energy Transition in Europe: initial lessons from Germany, the UK and France

REPORT | The Energy Transition in Europe: initial lessons from Germany, the UK and France

Momentum for climate action is building as the Paris Summit approaches. Europe has traditionally led efforts to tackle climate change, and has lessons to offer others. Several European countries – including Germany, the UK and France –have implemented new regulatory instruments to facilitate the transition to a low carbon economy. Focusing on the power sector, this new CERRE Energy & Climate study reviews the early experiences in those three Member States and provides practical guidance for other countries and regions. The report is co-authored by a team of distinguished academics, led by Natalia Fabra and including Felix Matthes, David Newbery, Andreas Rüdinger, Michel Colombier, and Mathilde Mathieu.

The report notes that the Energy Transition is a lengthy process that requires strong political support, not least because of the often-conflicting interests that arise when technologies, social norms, and institutions change. In the face of large and diverse risks, regulation should seek to intervene efficiently to minimise overall costs, both for firms and for consumers. This calls for the use by regulators of long-term contracts for new investments (both in renewables and in back-up capacity), as the reduced risk exposure for investors should translate into lower risk premia. Evidence also shows that the current regulatory arrangements in power markets are not well suited to induce the required investments in capital-intensive assets, or to set prices in renewables-dominated systems. The authors therefore recommend that a future-proof electricity market should rest on three pillars:

The authors of the CERRE study urge national governments to put in place, without delay, targets and policies leading to an almost carbon-free power sector by 2050.

Bruno Liebhaberg, Director General of CERRE, says: “Each and every recommendation made by Natalia Fabra and her co-authors in their indisputably valuable contribution will not necessarily be shared by all stakeholders. One can, however, not challenge this fact: Europe’s climate and energy policies are an important complement to, but not a substitute for, national policies”. The road ahead is long and windy, but the stakes are high.

What sponsoring CERRE members say about this report:

Walter Boltz, Executive Director, E-Control Austria: “This CERRE report constitutes an important contribution to the on-going discussions on a future design for electricity markets. It highlights clearly some crucial elements of that design, i.e. flexibility and liquid energy markets across borders. It also reinforces my view that carefulness will be needed if and when moving to a regulatory framework based on competition for markets. Account will have to be taken of the risk for such framework to be used for other purposes, such as market foreclosure and indirect subsidies for incumbent industries under economic stress. Based on practical case studies, this CERRE study makes timely recommendations on potential remedies and solutions to the challenges we are facing today.”

Michel Matheu, Head, EU Strategy, EDF: “EDF welcomes the new CERRE’s report which characterizes and assesses quite clearly some of the main European transition models. In EDF’s view, however,  and without prejudice to the academic robustness of the report, the latter underestimates both the short- and long-term costs of the German reform and the track record of the French decarbonisation strategy, i.e. 91% carbon free power generation and low prices. In addition, we do not share the author’s recommendations regarding market design. In our view, there are indeed good reasons to support competitive energy, capacity and carbon markets rather than a regime outside of common law for mature renewables”.

Simone Mori, Head of European Affairs, Enel: “This study provides a clear, accurate and unbiased understanding of the different decarbonisation policies implemented around Europe in recent years. Of the recommendations that conclude the report’s comprehensive analysis, I fully agree with the need to increase the role of long-term contracts in the delivering of stable signals to the market, which will in turn guide the industry’s investment decisions. This measure will be key in allowing energy players to reach the decarbonisation goals through competitive costs, while enabling both the integration of the European market and the conditions for an effective energy transition.”

Professor Natalia Fabra is a Professor in the Economics Department of Universidad Carlos III de Madrid. She is also Research Affiliate at the Centre of Economic Policy Research in London and Associate Editor of the Journal of Industrial Economics. She edits RePEc’s New Economic Papers on Regulation. In the past, Natalia has been a visiting scholar at various universities, including the University of California Energy Institute, the Institut d’Economie Industrielle (Toulouse), and Nuffield College (Oxford). Natalia works in the field of Industrial Organisation, with emphasis on Regulation an Competition Policy issues. She has worked extensively on the economic analysis of electricity markets. She holds a PhD from the European University Institute.

Dr Felix Christian Matthes is Research Coordinator, Energy & Climate Policy at the Öko-Institut – Institute for Applied Ecology in Berlin. He is author of numerous studies and publications on German and international energy, environmental and climate policy. Key topics of his research include decarbonisation strategies for Germany and the European Union, EU energy market development and market liberalisation, energy and emissions projections as well as greenhouse gas emissions trading. Dr Matthes is a member of the Advisory Group to the European Commission on the Energy Roadmap 2050 and has also served as a scientific member of the German Bundestag’s Study Commission on Sustainable Energy. From 2007-2008, he was a visiting scientist at the Massachusetts Institute of Technology. Dr Matthes graduated as Diplom-Ingenieur from Leipzig University of Technology and holds a PhD in political science from the Free University of Berlin.

Professor David Newbery is Research Director of the Cambridge Energy Policy Research Group, Emeritus Professor of Applied Economics at the University of Cambridge, an a Research Fellow in the Control and Power Research Group at Imperial College London. He is Fellow of the British Academy and of the Econometric Society. He was the 2013 President of the International Association for Energy Economics. Educated at Cambridge with degrees in Mathematics and Economics, ha has managed research projects on utility privatisation and regulation, electricity restructuring and market esign, transmission access pricing and has active research on market integration, transmission planning and finance, climate change policies, and the design of energy policy and energy taxation. Occasional economic advisor to Ofgem, Ofwat, and ORR, former member of the Competition Commission and chairman of the Dutch Electricity Market Surveillance Committee, he is currently a panel member of Ofgem’s Network Innovation Competition, a UK’s Electricity Market Reform and the Deputy Independent Member of the Single Electricity Market Committee of the island of Ireland.

Dr Michel Colombier is Scientific Director, and one of the founders, of IDDRI (Institut du Développement Durable et des Relations Internationales). Dr Colombier is an agricultural engineer and holds a PhD in Economics. A specialist in energy politics and climate issues, he has served as a member of the scientific panels of the Global Environment Facility (GEF) and the French Global Environment Fund (FGEF). Having worked at the Centro de Estudios de Economia, Energia, Transportes a Ambiente (CEEETA) at the University of Lisbon, he joined l’Agence de l’environnement et de la maîtrise de l’énergie (ADEME), a French government body charged with promoting environmental protection energy efficiency and renewable energy.

Mathilde Mathieu joined IDDRI (Institut du Développement Durable et des Relations Internationales) in 2013 as researcher, where she has conducted a comparative analysis of national energy transition scenarios and is currently working on European energy an climate policies. After completing her studies as an electrical engineer at the National Institute of Applied Sciences (INSA) in Lyon in 2011, she worked in the field of energy with Areva. In 2012, she obtained a Master in Public Public Policy and Environmental Strategy from AgroParisTech-ENGREF. She has also spent time at the Politecnico di Torino (2008) and at Instituto Tecnológico de Buenos Aires.

Andreas Rüdinger is a Research Fellow at IDDRI (Institut du Développement Durable et des Relations Internationales) specialised in energy and climate policies. He currently leads several projects on the European electricity market and national energy transition strategies. His work focuses on the development and integration of renewable energies an energy efficiency policies. He has published several comparative studies on energy policies in France and Germany. Andreas completed his Master’s degree in political sciences at Sciences Po Bordeaux and the University of Stuttgart, Germany.