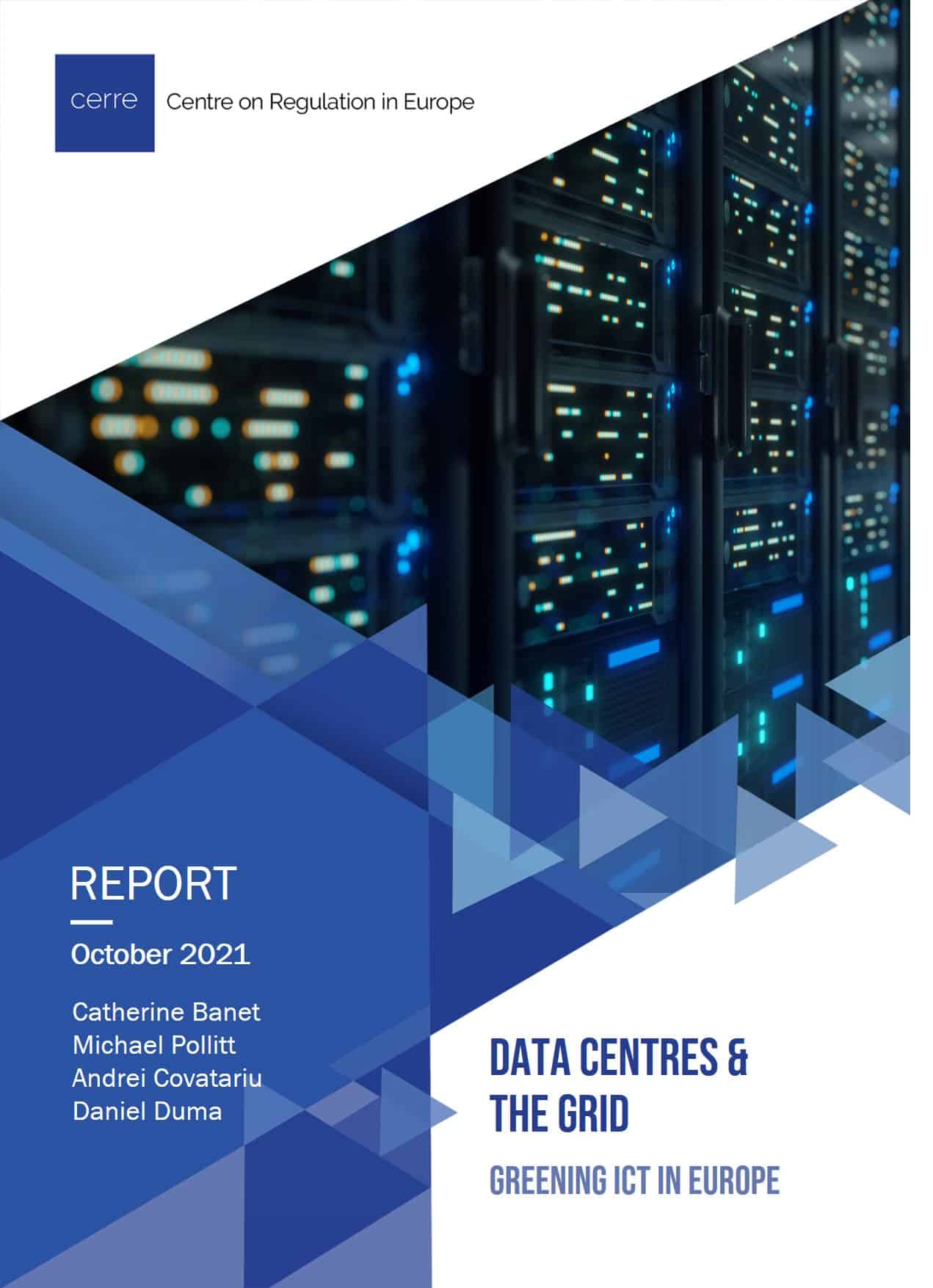 Data Centres and the Grid – Greening ICT in Europe

A key part of the ICT sector, DCs are a small but growing part of the total EU electricity demand (estimated at 2.7% in 2018). Some projections predict a significant rise by 2030, especially in the context of falling total demand for overall energy but rising electrification. However, the wide range of demand estimates, as identified by the authors, further illustrates the need for more transparency around the underlying data on which current estimates are based.

The report shows how the rise in DC electricity demand has been rather modest against a backdrop of sharply rising demand for data and the growth of large-scale DCs. This can be credited to significant efficiency improvements; in part thanks to more efficient cloud hyperscale DCs. DC owners have also invested considerably in renewable power purchase agreements (PPAs) to cover the equivalent of their electricity demand with low-carbon electricity.

Effectively measuring DCs energy efficiency is a significant challenge, particularly when it comes to defining harmonised criteria that adequately consider all aspects of energy efficiency. The report looks into widely used and relevant metrics. It also considers how DCs’ uninterruptible power supply (UPS) and back-up generation capacity are used.

“Although digital technologies represent an obvious asset in the face of the 21st century environmental challenges, they cannot escape the constraints on energy demand that weigh on every sector of activity on the path to net zero.” Michael Pollitt

Like any significant electricity-consuming sector, DCs will be challenged on their consumption and will be expected to interact with the rest of the energy system in a way that facilitates wider decarbonisation. They cannot escape the pricing implications of net zero and its likely requirements for increased differentiation of connection, energy, and ancillary services costs. This presents opportunities for DCs that can offer flexibility to a grid that will be increasingly dominated by variable renewable electricity (VRE).

The authors go on to examine the extent to which Europe attracts DC investment, comparing European cities on criteria such as quality and availability of electrical capacity, temperature, fiscal incentives, and proximity to data demand. This allows a better understanding of why DCs may cluster around particular cities.

They discuss DC markets in Ireland and Denmark to demonstrate the importance of interconnection, renewable electricity shares, and the proximity of heat networks for longer-term prospects in the DC markets that are currently favoured. These case studies illustrate how cluster growth can lead to significant local grid management issues.

DCs will be increasingly targeted and, in this context, their regulation under EU law must be made consistent across the different legislative acts:

“EU legislative and regulatory initiatives should also aim to foster synergies and mutual benefits from the integration of DCs within the energy system.” Catherine Banet

The report suggests that:

Over the next ten years, European Internet traffic is expected to grow, but the consequences for DC electricity demand are uncertain. The report highlights emerging issues around some particular cities such as Dublin, with large and growing DC clusters, that may have consequences for the national electricity grid. This has increased grid constraints and could potentially result in increased cost to consumers if there are increased demands on electricity networks and should resource adequacy gaps emerge. It has also resulted in planning permission and siting issues over concerns for the availability of grid connection capacity, as well as political pressure to curtail DC investment in certain locations.

Pressure to better measure energy consumption is already manifesting within existing and proposed EU legislation and can be expected to continue. A wider range of metrics for modelling is needed. Currently information on DC electricity demand, and what drives it, is poor. The industry needs to make more information available so that there can be appropriate independent modelling of the end-to-end energy usage process in ICT.  Industry associations and industry standard setting bodies can (and already do) play a key role in spreading best practice on energy consumption and decarbonisation.

There seems little reason to negatively single DCs out in European law, given their need to have UPS and the potential for back-up generation and storage, unlike many other major commercial loads. In places where DC demand is growing sharply, electricity grid issues are related to the addition of any new large load, and hence can be addressed by regulations that target the load characteristics rather than the nature of the load’s economic output. A key test of the efficiency of regulation will be to assess whether it encourages large loads – such as DCs – to facilitate the energy transition and system integration.

Issues encountered locally when introducing DCs in certain locations emphasise the importance of:

The authors conclude that the DC sector has the opportunity to take a lead in corporate citizenship by going beyond the letter of the law and regulation when it comes to innovation in energy reduction and co-operation with others actors. This is already happening.

Finally, the report suggests that DC operators can go further in terms of ensuring that large DCs are capable of contributing to system-wide decarbonisation by appropriate configuration of their UPSs, onsite back up generation, energy storage and energy management to increase grid-level flexibility. This remains an under-researched area for future development.

This report will be presented and debated amongst academics, regulators, industry actors, and policymakers during a CERRE webinar at 14:30 CEST on 13 October 2021.

REPORT | Data Centres and the Grid – Greening ICT in Europe

Catherine Banet (PhD) is Associate Professor at the University of Oslo, Faculty of Law, Scandinavian Institute of Maritime Law, Norway.

Michael Pollitt is Professor of Business Economics at the Judge Business School, University of Cambridge. He is an Assistant Director of the university’s Energy Policy Research Group (EPRG) and a Fellow and Director of Studies in Economics and Management at Sidney Sussex College, Cambridge.

He is a former external economic advisor to Ofgem. He is a member of the editorial board of the Review of Industrial Organization, Competition and Regulation in Network Industries, Utilities Policy and The Energy Journal. He was a founding co-editor of Economics of Energy and Environmental Policy.

His research interests include productivity analysis, measurement of economic reform impacts and future electricity and carbon market design and regulation.

Michael has a D.Phil. from the University of Oxford.

Andrei Covatariu is a Senior Research Associate at the Energy Policy Group (EPG) in Romania and an expert for the United Nations Economic Commission for Europe’s (UNECE) Task Force on Digitalization in Energy. At the same time, Andrei is a GYCN Climate Ambassador (World Bank Group initiative), and a Climate Ambassador at Climate Interactive.

He was also a Member of the Board of the Future Energy Leaders-100 community and a Non-resident Fellow at the Middle East Institute, in Washington DC. He is also the co-founder of Circular2050.org, a think tank focused on the various facets of the circular economy model. Andrei holds a MEng in Nuclear Engineering and a Master in Public Policy (MPP) at the Blavatnik School of Government, University of Oxford.

Daniel Duma has a background in political science (B.A), public policy (MSc) and economics (PhD) and has worked in the energy sector for almost 10 years, holding various roles related to public policy, development, finance and sustainability at Enel. Currently, he is a Research Fellow at the Stockholm Environment Institute.

In 2020, Daniel completed the MBA program at the University of Cambridge, Judge Business School, with a concentration in Energy and Environment. Daniel is also an affiliated expert of the Energy Policy Group, where he contributed to research projects on the green transition and economic growth. Daniel is a fellow of the Aspen Institute Romania since 2015.