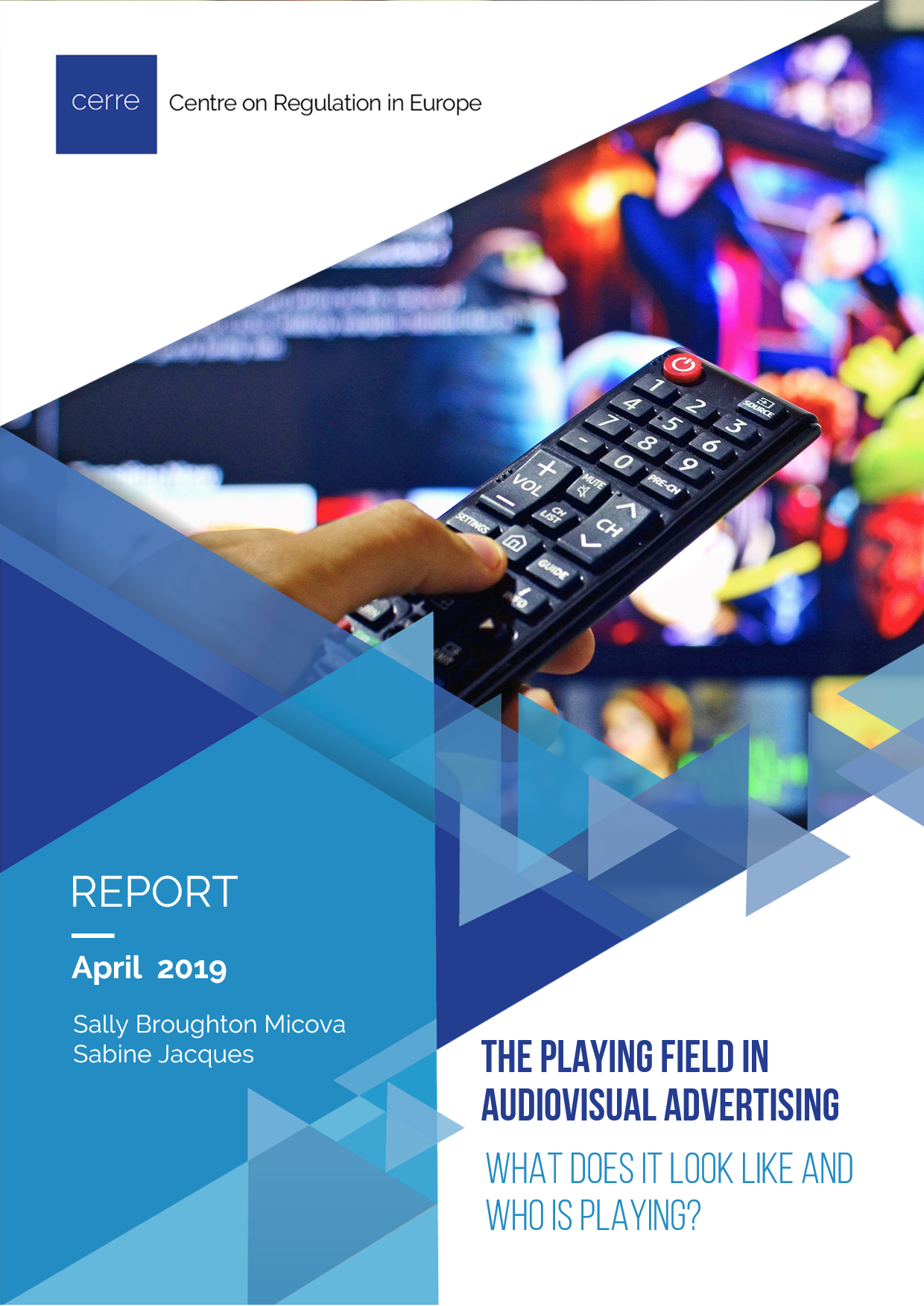 The playing field in audiovisual advertising

This CERRE Tech, Media, Telecom report contributes to policy debates by providing evidence on the dynamics of markets for audiovisual advertising in which both audiovisual media services (AVMSs) and video sharing platforms (VSPs) are operating.

It addresses the following questions:

The distribution of advertising budgets resembles concocting a recipe from a number of different ingredients all of which have different features. Agencies do not see it as competition between offline and online, but about finding the right mix of numerous options to reach certain objectives, and they engage in extensive research and complex modelling to do this. Nevertheless, budgets are not expanding currently and there is increased pressure to achieve efficiency and short-term effects, reported against key performance indicators (KPIs).

Agencies and advertisers still view TV as crucial for advertising, especially for brand building and awareness, and often TV advertising is the flagship around which the rest of the campaign is designed. TV is trusted because its regulatory framework ensures it is a ‘brand safe’ environment and a good viewing experience, and because the audited measurement systems provide transparency in terms of where advertiser money is going and what it is getting.

For agencies and advertisers, online video advertising is attractive for its efficiency in reaching target audiences, often with significant cost saving and in extreme detail, and for the ability to receive rapid feedback on the response to ads placed. They also value online options for small or experimental campaigns. Despite remaining suspicious of much of the data that is produced and concerned about brand safety, they often need to reach the audiences no longer watching TV and they get excited about the optimisation possibilities available.

There are differences in the qualitative rules around advertising and agency respondents reported being able to do things online that they cannot do on TV. Some of these rules have been equalised with the 2018 update to the EU’s Audiovisual Media Services Directive (AVMSD). Rules on misleading and comparative advertising are largely harmonised at the EU level and apply to all services, so this area of law was mostly the same in all four jurisdictions studied. A ban on political advertising on AVMSs was also common to all four, with no equivalent for VSPs. Efforts to address political advertising online are nascent, mainly focused on ensuring disclosure, and tied to efforts to combat disinformation. There is also a difference in product placement rules. The 2018 AVMSD includes user generated content (UGC) in the definition of product placement and allows it for the most part, but the exceptions, such as children’s and consumer programmes, in which it is prohibited for AVMS providers do not apply to VSPs.

As they implement the AVMSD, Member states should devise co-regulatory mechanisms that will be effective in enforcing content and advertising standards on VSPs and adhere to the Directive’s intention of levelling the playing field. The Commission’s guidance as to what qualifies as a VSP and criteria for co-regulatory mechanisms should be designed to maximally even out conditions among advertising-dependent services.

Though there is no need to regulate UGC producers such as vloggers and influencers, national regulators should provide disclosure guidelines similar to those for content on AVMSs, and the European Regulators Group (ERGA) should investigate whether there is a need for the AVMSD’s product placement exceptions to be extended to VSPs.

Industry bodies with support from national regulators should work towards standardisation of measurement within and across channels, including both agreement on a ‘common currency’ measurement for video and innovative ways in which the need to service KPIs can be addressed by all players.

Whereas the most popular VSPs are global companies able to use that status advantageously for tax purposes and draw on extensive financial and human resources, AVMS providers are often prohibited by national-level rules aimed at protecting media pluralism from collaborating or even combining resources within the same group in ways that might allow them work towards addressing these imbalances. Some AVMS providers are engaged in transnational collaborations.

Rebates and discounts based on scale and duration are common practice in how prices are set both for online and offline inventory, except when they are determined by auction in the programmatic systems. These and other contract conditions are subject to negotiations that, for AVMS providers in some jurisdictions, are constrained by trading frameworks.

Member states should revisit media plurality measures, including cross-ownership rules, with a view to enabling AVMS providers to co-operate in some areas, in which greater scale or scope may be crucial to allowing them to compete against global VOD and VSP services, without reducing the pluralism of views and content available to citizens.

The European Commission should closely monitor the implementation of national-level taxes on the B2B revenues of platforms, such as Italy’s 3% “web tax,” to assess the effects on the wider ecosystem and other businesses, and consider roll out across the Union.

Data Ownership and Use

VSPs can leverage the consent that they gather from their vast user base for targeting purposes and for the kind of tracking of an individual’s post-exposure journey needed to provide ROI results and make attribution claims. On the other hand, AVMS providers have only recently been requiring registration for users to access their AVOD and this is still giving them a rather limited type and amount of data on their users. The extent to which addressable TV gives AVMS providers useful data depends on the arrangements with the company providing the set top boxes to households.

There is also an imbalance in access to online campaign-related data. The agreements that agencies and advertisers have with demand side platforms give them ownership of such data for their own campaigns. However the AVMS providers, or other publishers on the supply side, do not get such data for the campaigns run on their sites or around their content. A parallel might be if BARB, Auditel or Mediametri data was only available to agencies and advertisers. Our evidence indicates that data is an essential element of competition, and inventory holders such as AVMS providers and VSPs must be able to address the need for advertisers to demonstrate performance.

Agencies and advertisers have concerns about dominance in the exploitation of data in this ecosystem that merit investigation. Respondents from various categories noted that GDPR appears to have further concentrated power in the hands of global platforms operating in the programmatic systems. Several mentioned the challenges of trying to compare across “walled gardens” of data maintained by those providing online advertising inventory and the lack of choice about what platforms they can use.

REPORT | The playing field in audiovisual advertising What does it look like and who is playing?

Sally Broughton Micova is a CERRE Research Fellow and a Lecturer in Communications Policy and Politics at the University of East Anglia (UEA). She is also a member of UEA’s Centre for Competition Policy.

Her research focuses on media and communications policy in Europe.

She completed her PhD in the Department of Media and Communications at the London School of Economics and Political Science (LSE), after which she was an LSE Teaching and Research Fellow in Media Governance and Policy and Deputy Director of the LSE Media Policy Project.

Sabine Jacques is a Senior Lecturer in IP/IT & Media Law at the University of East Anglia (UEA), which she joined in 2016. She is also an active research member of UEA’s Centre for Competition Policy and has experience in teaching Intellectual Property Law, Industrial Property Law and Media Law.

Her teaching reputation has been acknowledged by the European Intellectual Property Teachers’ Network as she was awarded the best presentation prize 2017.

She recently became an editor of the International Journal of Public Law and Policy.

Her monograph ‘The Parody Exception in Copyright Law’ was published by Oxford University Press in March 2019.