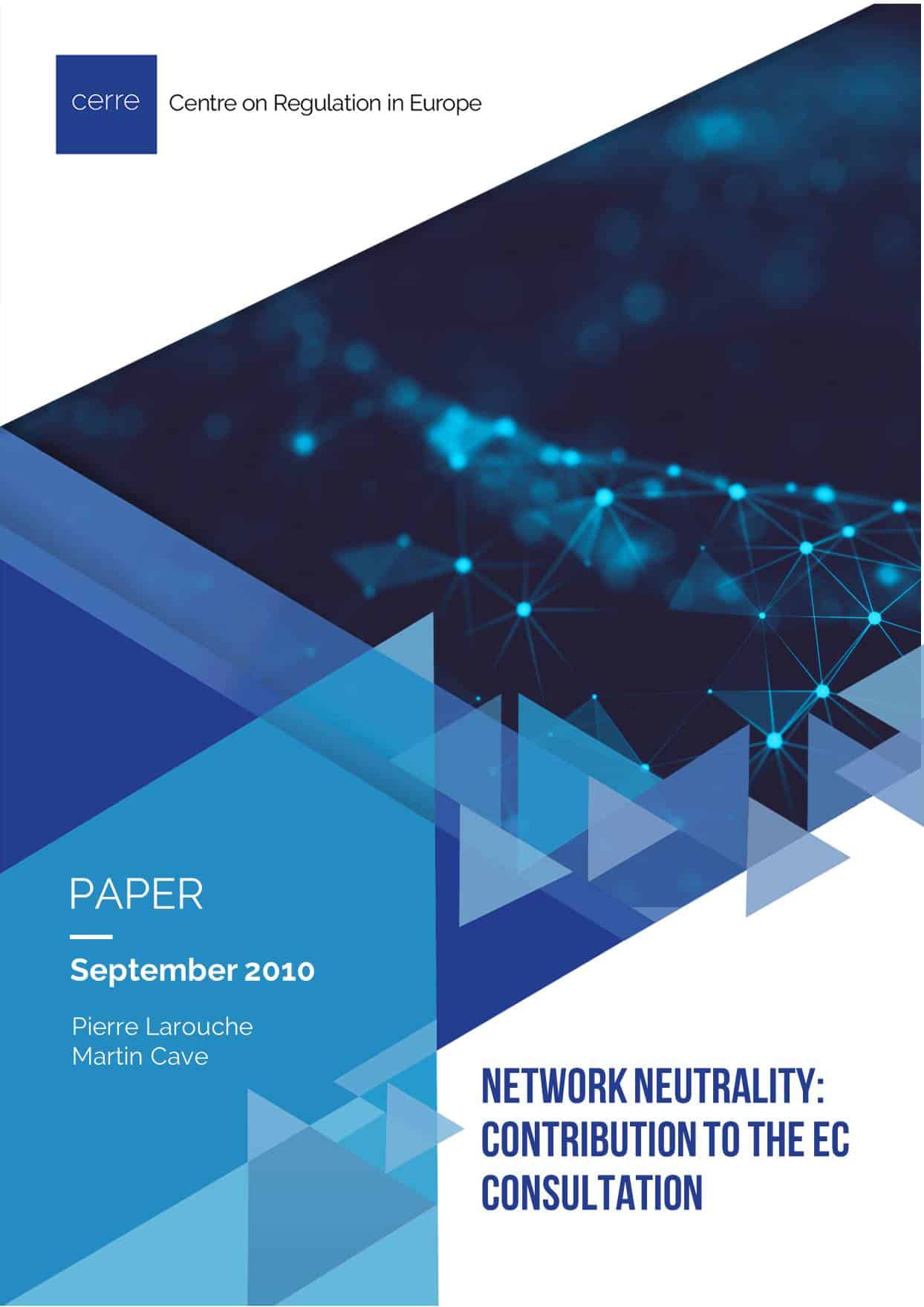 The term ‘network neutrality’ covers a number of distinct issues. In the short term, Internet Service Providers (ISPs, the firms providing broadband access to the Internet) must take measures to deal with imbalances and congestion on their networks. Beyond that, in the longer term, ISPs are looking to introduce differentiated Quality of Service (QoS) offerings: they would turn their services to a two-sided platform, where a given QoS level (in terms of priority and other technical characteristics) could be purchased by users, on the one hand, and content, application and service providers, on the other hand.

From the perspective of competition policy and sector-specific regulation, an assessment of this evolution requires an analysis of two markets (broadly defined), namely those of content provision (including services and applications) and broadband access to the Internet.

At the ISP level, significant market power could exist either vis-à-vis an ISP’s own users (because these users can only access the Internet via their ISP) or vis-à-vis content providers (because they can only reach users via each user’s ISP).

Vis-à-vis users, the ability of users to switch to another ISP – which is enhanced by wholesale broadband access regulation in the EU – acts as a brake on any market power on the part of the ISP. In any event, both sector-specific regulation and competition law are available to deal with any exploitative abuse which could arise.

Vis-à-vis content providers, one could think of the ISP as occupying a position similar to that of a terminating telecommunications operator (which is typically found to hold significant market power on the market for terminating communications to its subscribers). But this analogy is imperfect, since users typically access the Internet via many different routes: fixed broadband at home and at work, mobile access, wi-fi hotspots and others. There is a widespread concern in the literature that an ISP with market power would integrate vertically into content or seek exclusivity deals; it would then engage into discrimination against, or even blocking of traffic from, non-affiliated content providers. Yet ISPs have little economic incentive to do so. Even then, competition law is available to deal with such conduct should it arise. Provided that a relevant market is added to the Recommendation on relevant markets susceptible to ex ante regulation, the SMP regime could also be used to deal with such an issue.

Beyond that, the introduction of a transparency obligation in Directive 2009/136 will improve the functioning of the market for broadband access. Recent experimental evidence indicates that this obligation can be welfare-enhancing, and points to various implementation options (full information to a subset of users, partial information to all users). More research is needed, but we would suggest looking into innovative QoS measurements such as third-party benchmark indexes.

We conclude that no additional legislation is needed to deal with market power issues. However, sufficient resources must be devoted to monitoring and enforcement if existing legislation (competition law and sector-specific regulation) is to work effectively.

In addition to market power issues, a very basic policy concern is whether differentiated QoS should be allowed at all. Economic arguments point to benefits arising from the introduction of differentiated QoS, as well as potential risks. At the time being, on a proper view of the evidence, there is no case for an intervention to prohibit differentiated QoS altogether. More specifically, there is no reason and no legal basis to construe discrimination more broadly than under competition law (discrimination by a dominant ISP as between firms in a similar position, with an anti-competitive effect) or the internal market (discrimination based on nationality, residence or establishment).

However, depending on which of three possible scenarios materialize, it is possible that the introduction of differentiated QoS by ISPs would lead to a fragmentation of the internal market, because QoS platforms would be primarily national. For the time being, monitoring is warranted. As it becomes clearer how differentiated QoS is introduced, there might be room for a light-touch intervention to prod the market towards a sufficient level of standardization to ensure that the Internet continues to benefit the internal market. By the same token, if NRAs should decide to intervene to impose minimum QoS requirements, coordination at EU level is highly advisable.

Amongst regulatory options alluded to in the Questionnaire, we strongly advise against creating a legal distinction between ‘managed services’ and ‘the public Internet’, since this would put the former in a regulatory straitjacket and impair innovation

Martin Cave is a Visiting Professor at the Imperial College London. He was an Academic Co-Director at CERRE and is now a member of the CERRE Board of Directors.

He is a regulatory economist specialising in competition law and in the network industries, including airports, broadcasting, energy, posts, railways, telecommunications and water.

Professor Cave has published extensively in these fields, and has held professorial positions at Warwick Business School, University of Warwick, and the Department of Economics, Brunel University.