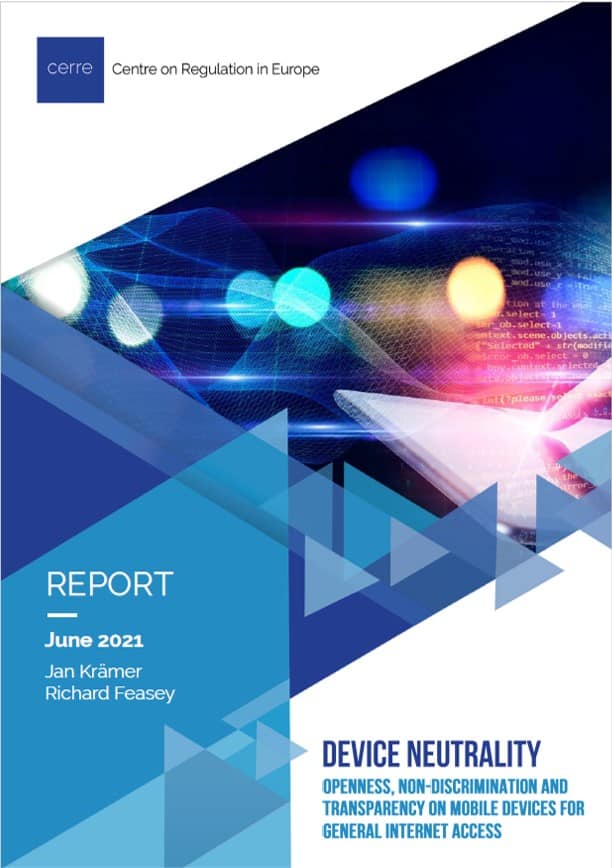 Since the ‘net neutrality’ debate began in the early 2000s, the internet ecosystem has evolved and European policymakers now face a different type of gatekeeper.

This CERRE Tech, Media, Telecom report identifies the main competitive bottlenecks and discusses whether the key pillars of net neutrality regulation – openness, non-discrimination and transparency – should also apply to certain types of devices, such as smartphones and laptops.

Assuming that smartphones are likely to be the first choice for consumers accessing the internet and that they are, therefore, a crucial element of the internet access value chain, the authors of the CERRE report make concrete suggestions, focusing on operating systems, app stores and browsers.

“Crucially, the policy objective should be to enable consumers to bypass gatekeepers and access content via multiple channels, but not ‘neutrality’ in the narrow sense,” said Jan Krämer (co-author of the report and CERRE Academic Co-Director). “Non-neutral conduct is important for innovation, investment, security and privacy.”

In light of existing EU regulation, specifically the Platform-to-Business (P2B) Regulation and the Digital Markets (DMA) and Digital Services (DSA) Acts, the report makes a number of recommendations, aiming to ensure openness, non-discrimination and transparency when accessing the internet on mobile devices.

As they represent a gateway for consumers to access other content and apps, the authors, Jan Krämer and Richard Feasey, make several policy recommendations for app stores that aim to strike a balance between mitigating the competitive gatekeeper advantage and maintaining the user convenience offered by pre-installed apps. These include:

“By intervening at the operating system and app discovery layer to ensure access to alternative content, the Commission can foster fairer competition in the internet access value chain without hindering innovation, investment and the European principles of consumer safety and security.” – Jan Krämer

The report was presented and debated on Tuesday 8 June, 14:00 CEST, during the CERRE public webinar “Device neutrality: regulating mobile devices”. The CERRE report and its recommendations can be read in full here.

Jan Krämer is an Academic Co-Director at CERRE and a Professor at the University of Passau, Germany, where he holds the chair of Internet & Telecommunications Business.

Previously, he headed a research group on telecommunications markets at the Karlsruhe Institute of Technology (KIT), where he also obtained a diploma degree in Business and Economics Engineering with a focus on computer science, telematics and operations research, and a Ph.D. in Economics, both with distinction.

He is editor and author of several interdisciplinary books on the regulation of telecommunications markets and has published numerous articles in the premier scholarly journals in Information Systems, Economics, Management and Marketing research on issues such as net neutrality, data and platform economy, and the design of electronic markets.

Professor Krämer has served as academic consultant for leading firms in the telecommunications and Internet industry, as well as for governmental institutions, such as the German Federal Ministry for Economic Affairs and the European Commission.

His current research focuses on the role of data for competition and innovation in online markets and the regulation of online platforms.

Richard Feasey is a CERRE Senior Adviser, an Inquiry Chair at the UK’s Competition and Markets Authority and Member of the National Infrastructure Commission for Wales.

He lectures at University College and Kings College London and the Judge Business School.

He has previously been an adviser to the UK Payments Systems Regulator, the House of Lords EU Sub-Committee and to various international legal and economic advisory firms.

He was Director of Public Policy for Vodafone plc between 2001 and 2013.