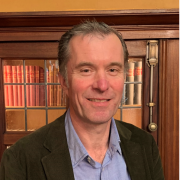 Richard Feasey is a Senior Advisor within the CERRE Tech, Media, Telecom academic team, an independent consultant and a Senior Adviser to the Payment Systems Regulator in the UK.