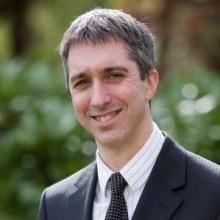 Garrett Blaney has been Chair of ComReg, Ireland’s Communications Regulator, since January 2019. Previously, he was Chair and Commissioner of Ireland’s Commission for Regulation of Utilities (CRU).

Prior to this, Garrett was Strategic Development Director for Viridian Power and Energy for ten years. Before that, he was Asia Regional Director for ESB International.

Garrett Blaney graduated in Electrical and Electronic Engineering from the Queen’s University Belfast in 1987.