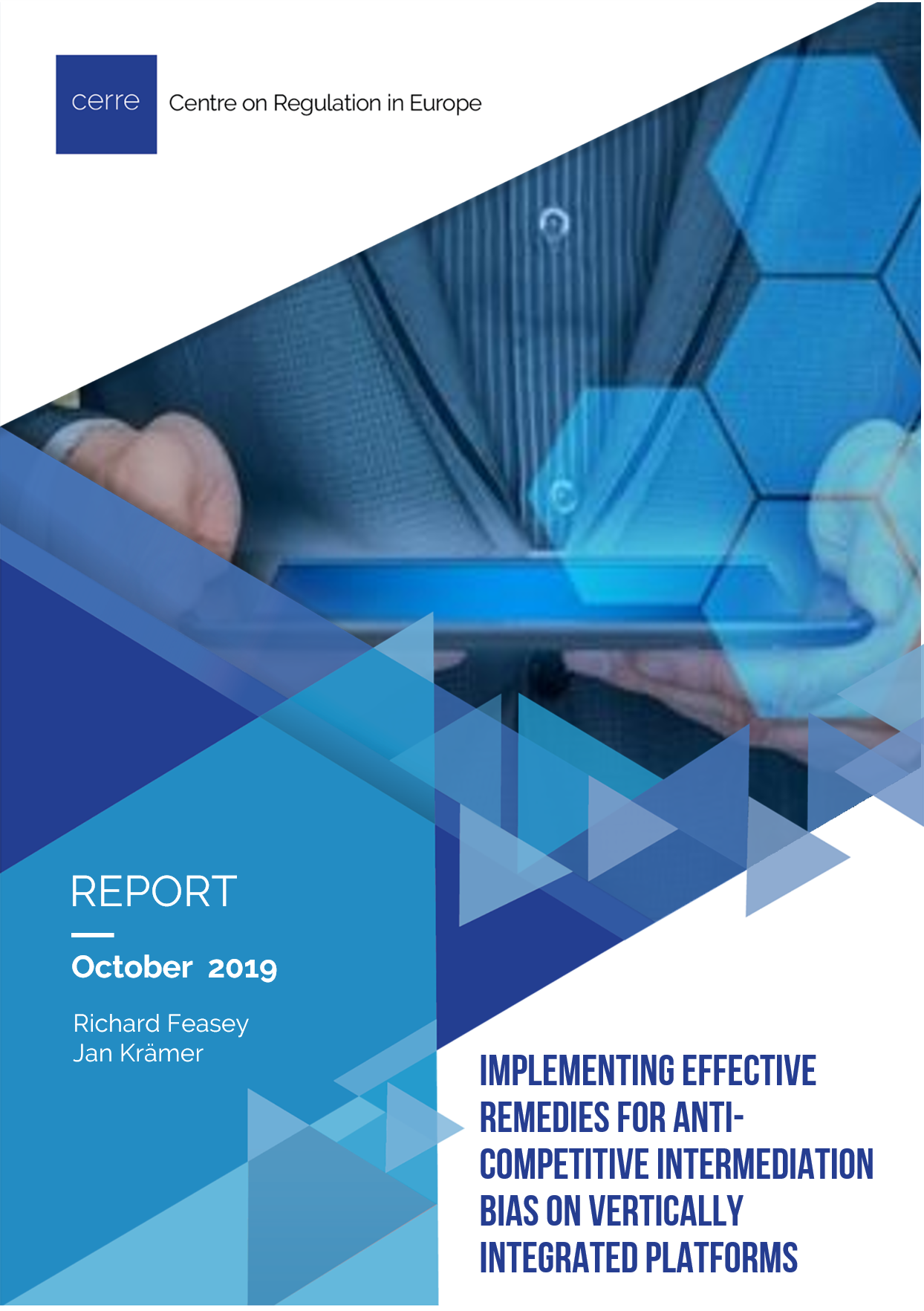 This CERRE Tech, Media, Telecom report considers the challenges that arise in remedying ‘intermediation bias’ by vertically integrated digital platforms which match the needs of different groups of users so they can transact with each other. Platforms perform this intermediation function by displaying and ranking those services or products which are most relevant to the users’ needs and, in doing so, compete for consumers’ attention.

What is intermediation bias?

Platforms compete for users’ attention to varying degrees depending on the ease with which users can switch between platforms and their inclination to do so, entry barriers for other platforms, and many other factors. Generally, platforms have an incentive to offer consumers the most relevant matches, because the platforms can then capture part of the value that has been created for both the consumer and the businesses that are being intermediated. However, sometimes platforms may also have incentives to deviate from offering the most relevant matches first and bias the intermediation towards matches that are more profitable to themselves. This concern is especially pronounced in the context of vertically integrated platforms which undertake both the intermediation function and supply services or products in the downstream market and who therefore have the ability to direct users’ attention towards their affiliated services and products, even if rival services or products are more relevant to users’ needs. Such ‘biased intermediation’ may harm consumers, both by providing them with poorer matches on the platform and by distorting competition in the relevant downstream market and, potentially, in the platform market itself.

Competition authorities have prosecuted a number of significant cases involving intermediation bias – including the recent Google Shopping case – and it seems likely that further cases will be pursued in the future. It can be very difficult to detect bias in the first place, or to determine the source of any bias that has been detected. Digital platforms use very complex algorithms to perform their intermediation functions and make frequent changes to them. Distinguishing between legitimate changes which improve the quality of matches and those which unfairly bias them can be very difficult since the impact of any individual adjustment can be subtle and the effects can be cumulative. This task may be even more difficult ex post, as competitive conditions may have changed in the meantime.

The challenge of remedying intermediation bias arises in part because a user’s attention is rivalrous and the selection and ranking of matches must involve giving prominence to some results and demoting or excluding others. Non-discrimination rules of the kind applied in the regulation of vertically integrated firms in network industries would compromise the core sorting function which the platform performs. Other remedies used in network industries, such as those requiring regulated access to upstream inputs, are also inappropriate when rivals in digital markets require equal access to users’ attention rather than to specific factors of production. Effective remedies against intermediation bias must either ensure that the platform no longer has an incentive to engage in biased intermediation by separating ownership of the platform from the entity engaged in the downstream activities, or must ensure that the platform no longer has the ability to produce matches which would harm users of the platform.

The need for experimentation

We recognise that competition authorities may be reluctant to undertake their own remedy design and may prefer to rely upon proposals submitted by platforms, criticisms by rivals, or benchmarks or quotas which specify outcomes in the downstream market rather than directly addressing bias in the intermediation process itself. This seems unsatisfactory. Instead, we would urge public authorities – whether a competition authority or some other body such as a specialist ‘digital agency’ or another existing regulatory body – to demand access to the same experimental data which the platform itself used when proposing any particular remedy. This means the authority would have the same access to internal data and documents of a firm as it is able to obtain when seeking to establish an abuse. In addition, the authority should be able to direct the platform to run other experiments in order to assess their effect on outcomes. They might even involve their own staff in the experiments being undertaken by the platform (as some financial service regulators now do before authorising new financial products). At the same time, a platform might submit experimental data before making changes to its factor-based mechanisms and obtain a ‘safe harbour’ ruling from the authority in return.

We think the sharing of experimental data in this way could significantly improve the quality and effectiveness of remedies for intermediation bias, whilst also providing greater certainty and objectivity for dominant vertically integrated platforms that perform intermediation functions. Such data is commercially sensitive and confidentiality would need to be assured. Experiments of this kind are better suited to assessing the impact of incremental changes than fundamental ones and may not be able to determine whether a particular set of changes would restore downstream market conditions to those which prevailed prior to the abuse, as opposed to those which now prevail. The experiments may impose some additional costs on platforms and should be undertaken only for the specific purpose of remedy appraisal.

Such a new approach may require new institutional arrangements and changes to the existing legal framework in order to implement them, and might involve both competition authorities and existing or new regulatory bodies working together in a way that they have not generally done to date. The boundaries between ex ante and ex post functions may be less obvious in the future: designing effective remedies for intermediation bias may require both ex ante assessments before they are introduced and ex post appraisals after implementation. It is likely to be a more iterative and a more collaborative process, informed by the scientific results of experiments, than anything we have seen undertaken by competition authorities to date.

Richard Feasey is a Senior Advisor within the CERRE Tech, Media, Telecom academic team, an independent consultant and a Senior Adviser to the Payment Systems Regulator in the UK.

Jan Krämer is an Academic Co-Director at CERRE and a Professor at the University of Passau, Germany, where he holds the chair of Internet & Telecommunications Business.

Previously, he headed a research group on telecommunications markets at the Karlsruhe Institute of Technology (KIT), where he also obtained a diploma degree in Business and Economics Engineering with a focus on computer science, telematics and operations research, and a Ph.D. in Economics, both with distinction.

He is editor and author of several interdisciplinary books on the regulation of telecommunications markets and has published numerous articles in the premier scholarly journals in Information Systems, Economics, Management and Marketing research on issues such as net neutrality, data and platform economy, and the design of electronic markets.

Professor Krämer has served as academic consultant for leading firms in the telecommunications and Internet industry, as well as for governmental institutions, such as the German Federal Ministry for Economic Affairs and the European Commission.

His current research focuses on the role of data for competition and innovation in online markets and the regulation of online platforms.